However, earlier in the day I was on the fence about going. The weather forecast had called for super cool temps, so I felt no attraction to wearing a heavier and bulkier coat along with my backpack (rucksack for my UK friends and fans). Plus, I’d sorta planned to go on a hike earlier on Saturday, taking advantage of some sun-filled skies. The hike didn’t happen, and that’s my fault. I got distracted first thing in the morning washing a couple loads of craft fabric that were coated with various degrees of sizing, then I washed down the rangehood, then dishes, then I felt I just had to iron a few pieces of the fabric that came out of the dryer too wrinkled to be left without the benefit of a hot steam iron. Then I remembered I had to go pick up a parcel. So off on my bike I went….and since I was in the neighbourhood I stopped into three retailers. Drat. Before I knew it I was looking at the midday clock and felt suddenly in need of a nap.

One nap later, cat and dog’s needs taken care of, I got me and my camera out the door, not to hike, but to attend Nuit Blanche 2019.

First stop involved taking the subway across the city to the Danforth East neighbourhood of Coxwell / Greenwood. I believe it was this area’s first time participating in Nuit Blanche. Coming out of the Coxwell subway station I headed down a well maintained pedestrian pathway to arrive at the first spot of interest, Tile-Scape at Robertson Parkette, created by Kevin Winn, Archie Pechawis, L.C.I. CyberARTS. Kudos to these artists for designing the lovely array of cheerful and colourful tile designs that are applied to the plain industrial cement retaining wall.

The second offering was only a few minutes away on the south side of the Danforth. If there was a prize for best use of board game pieces – Scrabble, then I think this interactive exhibit should win it. Unfortunately I can’t find the name of this exhibit on the official Nuit Blanche map.

Leaving this exhibit I walked west on the Danforth towards Greenwood Avenue. A BlogTO post I’d read earlier on Saturday had mentioned that various store fronts would be participating. And that they were. Two of the exhibits were actually inside buildings and based on the lines they must have offered something good to look at. I was delighted to see some smaller, independent installations.

Thanks to all that there was to see and watch along this short stretch of the Danforth I soon found myself at the Greenwood subway station boarding a train westbound to the Toronto Reference Library to see the elegantly moving offering Lo Fi Dance Theory, Moriyama’s Continuum. 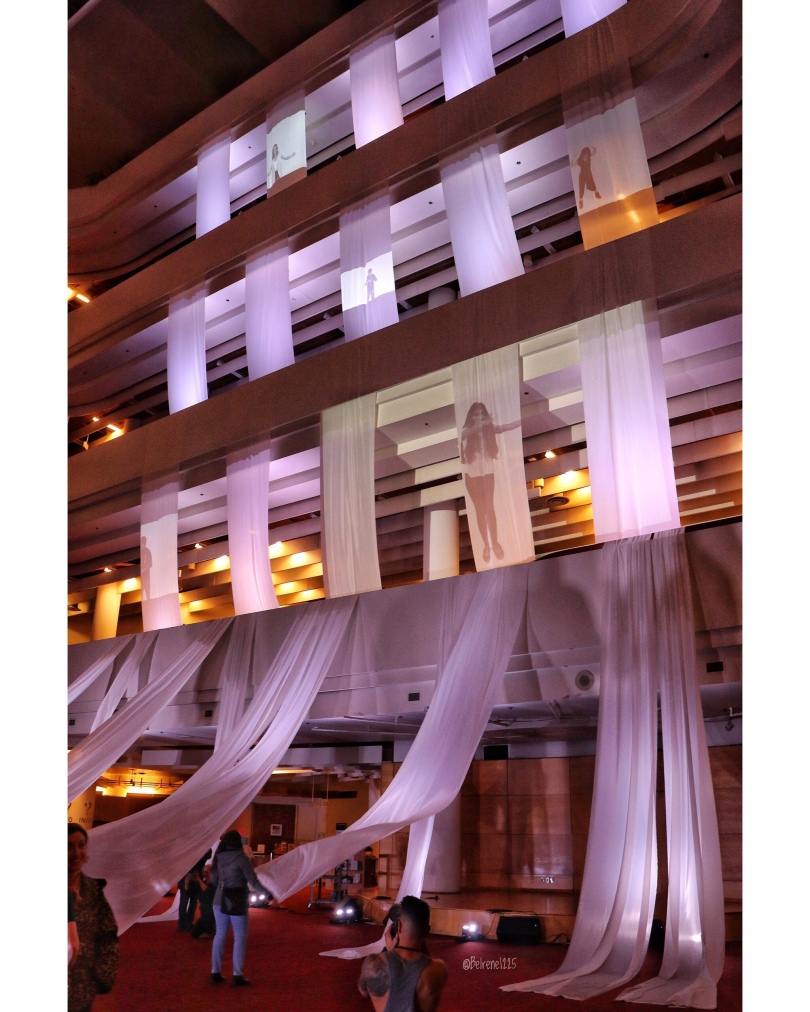 The one thing that I found disappointing about the Toronto Reference Library location was the absolute lack of lighting at the entrance to the building. It was dismally dark and drab, lacking any invitation to anyone who may have spontaneously stopped to see what was taking place.

Another short ride on the subway and I found myself at MaRS Discovery District, 651 University Avenue. Here I joined a large crowd to view the installation named Transformation, created by Fezz Stanton and Daniel Lanois.

Leaving MaRS I hopped on the subway heading north one stop to the ROM. I have annual ROM membership so I didn’t really need to see their offering but I was curious about the movie they were playing on the main floor, and they have very nice washrooms. Truth be told I really needed to use a washroom. The crowd was significant at the ROM. Viewing the ROM’s movie offering was made difficult though, due to lack of darkness, but they offered a lot of great seating with a generous mix of tables and chairs and sofas. Plus bar service was offered.

From the ROM I made use of the TTC and headed to Yonge Dundas Square to view Ghost Atelier by On Thin Ice. This popular location alone guarantees an immense crowd.

A 15 minute walk across Dundas to Bay, then south on Bay had me at Nathan Phillips Square, 100 Queen Street West, to join another huge crowd, this one viewing the immensely impressive exhibit by Daniel Arsham, Lunar Garden. 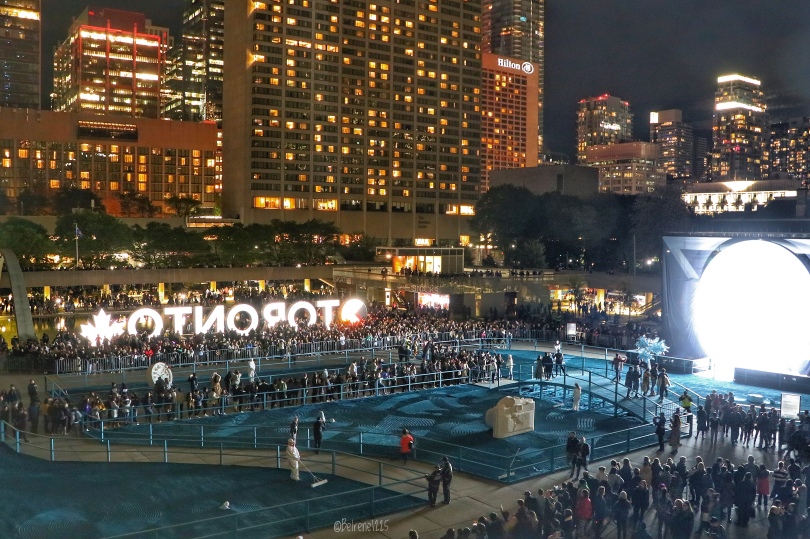 After Nathan Phillips Square I walked a short distance east on Queen Street to check out Chasing Red by Bekah Brown. Bekah was able to use the Eaton Centre bridge that crosses over Queen Street, connecting the Eaton Centre to The Bay and Saks. Not much caught my imagination at this exhibit so I started my journey to the next.

Unfortunately for me my next stop didn’t happen. I had wanted to make my way to the Queens Quay East neighbourhood to see the happenings at 130 Queen Quay East but alas during my walk south on Yonge Street the impact of a very full and active day caught up with me.

Before I sign off I want to give a shout out to all the Nuit Blanche volunteers, installation security guards, and the Toronto Transit Commission for doing an excellent job in helping make Nuit Blanche 2019 a success.

It’s my plan to attend Nuit Blanche 2020. Except next year I’ll be sure to have a quieter day beforehand ensuring more energy to spend walking through more exhibits.

This is a text widget. The Text Widget allows you to add text or HTML to your sidebar. You can use a text widget to display text, links, images, HTML, or a combination of these. Edit them in the Widget section of the Customizer.